Home / History of the profession

We can trace the first precedents of insurance activities all the way to the greek and roman maritime trade during the classical period, but it was the Phoenicians who set the grounds for this type of activity in the ancient world. The contract was simple: they settled and amount to pay (equal or less to the value of the ship and its load), and a percentage of it would be paid in advance. If the shipment didn’t arrive to its destination, the preset amount would be paid. 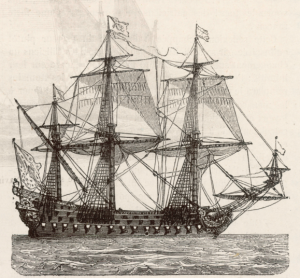 However, by actuarial method we understand the joint use of probability, interest theory and statistical analysis for the valuation of insurances in their many modalities. Therefore, it was fundamental for the development of the actuarial science as we know it today to develop those areas first.

The first precedent of the actuarial method can be found in the work of the banker Laurens Tontis. Worried by the scarce financing of the armed forces during the Nine Year’s War in 1689, he proposed an annuity system to gather funds. It would create associations of individuals of different ages to establish an equitable fund. The total funds would then be invested, and the interest generated in a year would be divided among the surviving members.

Afterwards, there were many people that contributed in the development of the actuarial science. Christian and Jodewijk Huygens, born in the Netherlands, explored together possible life expectancy calculations and annuities. Johan de Will used his statistical and mathematical knowledge to implement on of the first methodologies developed to calculate annuities. Edmund Halley developed in his publication Of Compound Interest and Annuities the notion of accumulation of a monetary unit under particular rates to convert it in r u.m. at the end of a year. He also added to this work the concept of present value. Halley also published one of the most relevant treaties for the actuarial science: An Estimate of the Degrees of Mortality of Mankind, Drawn from Curious Tables of the Births and Funerals at the City of Breslau. Here he establishes a life table, which was later perfected by Abraham de Moivre, who applied a formula to an empirical table with the intent of explaining the behavior of mortality in people during periods of time shorter than a year. He also proposed ways to better the calculations and application techniques.

In spite of the impressive advances made in those time, the term ‘actuary’ did not exist quite yet to describe the pioneers in this new science. The word itself is derived from the latin word actuarius, which means stenographer, or the book keeper. It was used to name the person responsible of writing the Public Act of the Roman Senate, and the one in charge of keeping tracks of the expenses and of the management of military supplies.

James Dodson was the first person to calculate a range of premiums for a life insurance company. Afterwards he decided to create a mutualist life insurance society with some colleagues, which was based on his earlier calculations. After his death, Edward Rowe Mores assumed the role of leader of the group and established an association under the name of The Society for Equitable Assurance on Lives and Survivorships. The director of this association would be called the actuary. It seems Mores himself took this decision, perhaps because he was so used to the actuaries that recorded the events at the court; one of the principal duties at the Equitable Society was recording all contracts concluded, after all. He could have also decided this on a whim. 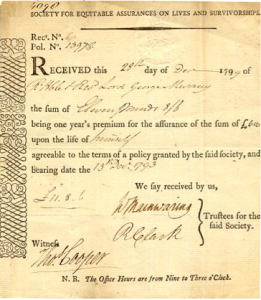 Society for Equitable Assurances on Lives and Survivorships

Nevertheless, the duties expected to be performed by the actuary didn’t involve the calculation of primes, obligation valuation, risk selection, or any other activity that today’s actuaries do. It wasn’t until William Morgan, fifth leader of the association, that the actuary was seen as a professional with mathematical abilities and a deep interest in experimental science. In addition to fulfilling his duties, he explored both the calculations for primes and obligations, and the analysis and distribution of benefits. He exercised his profession for fifty-five years; he passed away at eighty-six.

1848 was the year that witnessed the official birth of the actuarial profession, since it was then that the Institute of Actuaries was formed in London by a group of actuaries coming from diverse life insurance companies. A few years later, in 1856, the Facutly of Actuaries was created in Edinburg.

This surge of actuaries started scattering across the world, establishing diverse associations in many developing countries. The need to group the different guilds at a global scale led to the foundation of the International Actuarial Association (IAA), which is in charge of proposing, based in its global vision, a study program for the academic institutions, as well as the development and diffusion of the most relevant topics in this field today. 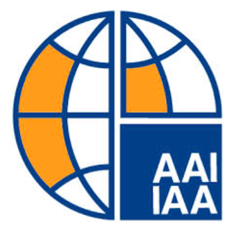