The first insurance companies to operate in Mexico came mostly from Canada and the United States, so the first actuaries in the country were foreigners. These professionals are responsible for starting what is now a very strong career in Mexico.

Through the years, a very important group of people, who were interested in actuarial occupations, gathered and, through the initiative and guidance of Frederick A. Williams, founded the Mexican Institute of Actuaries (IMA, for its initials in Spanish) on July 16 of 1937 and titled fourteen of its founding members.

The Mexican Institute of Actuaries adopted a model based on a universitarian system. Because of that, the Institute (now dismembered) presented in 1946 a proposal to the Autonomous University of Mexico (UNAM) for an undergraduate program in the Faculty of Sciences.

After the enactment in 1945 of the fifth Constitutional law, regarding professions and their exercise, where actuary was recognized as a scientific technique which required a degree, Emilio Velarde started his career as one of the founding professors, with the chance and responsibility to design the first study plan of the program. Other key members were Antonio Chávez Orozco and Juan B. Solórzano, members of the Mexican Institute of Actuaries, and Alfonso Náppoles Gándara, chief of department of mathematics in the Faculty of Sciences. 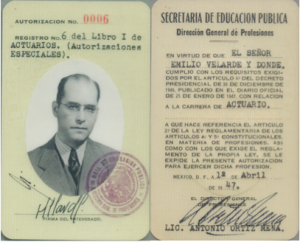 The second actuarial guild founded on our country is the still existing Mexican Actuarial Association (AMA, for its initials in Spanish), founded on august 2 of 1962. Nowadays, it is a strong representative before authorities and international organizations.

About five years after the founding of the AMA, the National School of Actuary (CONAC), which were in charge of developing and regulating actuary in Mexico. Among their founding members is Emilio Velarde, nowadays, this organization is the main representative of the actuarial guild before government authorities, enterprises and professional associations in other countries.

We could say that the career reaches a high point in 1967, due to the impulse that these two organizations gave to the profession, the growing national insurance industry, which demanded higher technical knowledge and also due to the second and most radical update that was given to the study plan that same year.

Other institutions that offer an undergraduate program in actuary and their corresponding year of foundation:

It should be noted that, during the last years, all mexican institutions that offer the actuary bachelor’s program have adopted international standards. To fulfill this objective, Colegio Nacional de Actuarios and Comisión Técnica Consultiva de Actuaría of the professor’s general directive at the SEP reviewed the documents that the International Actuarial Association recommends when referring to material that every actuary must know.