UNAM’s program’s first study plan was approved on February 13, 1947, a few years later, on 1958, engineer Emilio Velarde and the rest of the professors made the first of the program’s reforms.

The program was given a second update on 1967, where its main change was changing from an annual system to a semestral one (due to general UNAM reforms). Besides, a wide acceptance of risk experts with mathematical bases opened up more careeroptions, for this reason initiative was yielded to students that wished to specialize on ten optional courses.

The ’67 study plan was employed for many years. Due to the career’s nature, applied to evolving financial activities, who are constantly becoming more sophisticated and regulated, it was necessary to follow those changes in parallel with the study plan.

The second readjustment to the study plan came in 2000, aiming to level with the latest advances in actuarial science, that is why optional courses are reduced to six and Private Pensions, Risk Theory, Operations Investigations and Social security turned into compulsory subjects. Likewise, social sciences and operations investigation are seen as specialization areas.

Six years later, in 2006, another adjustment to the curricular map is made, financial mathematics is moved to the second semester in order to give it a more modern focus, which requires knowledge on differential calculus, accounting is switched to first semester; two optional courses are removed and subjects that aimed to strengthen the Faculty of Science’s actuaries mathematical bases and to cover for international standards: Stochastical Processes, Statistics III and Actuarial Administration.

In 2014, after a long and thorough analysis, a new curricular map was accepted. This presents structural and content modifications. To examine it, we present the following diagram and we will make some observations. 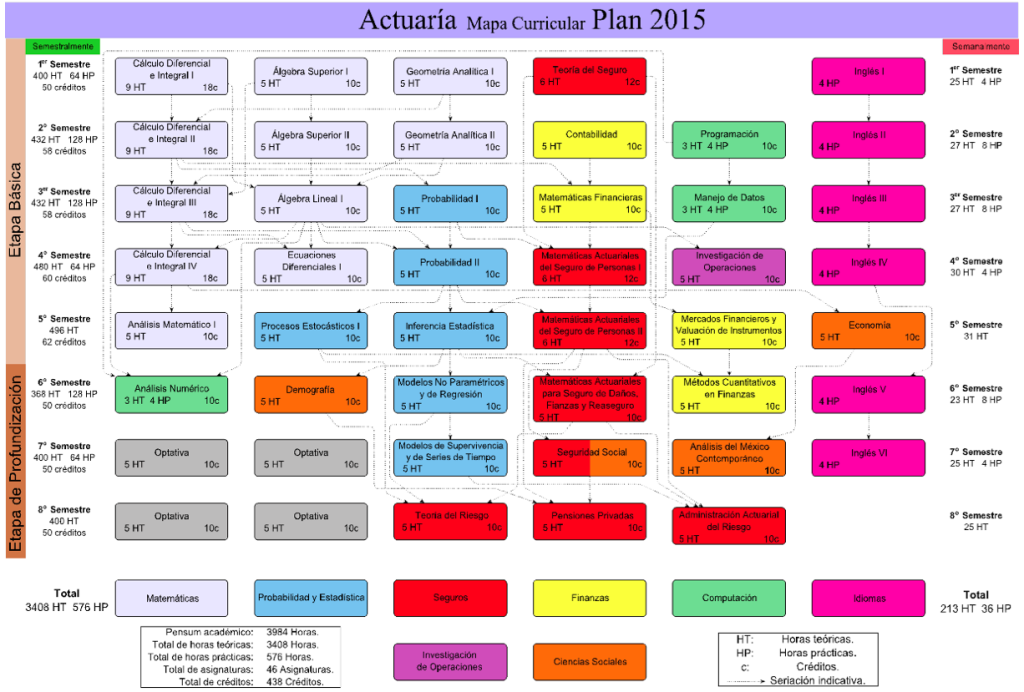